Get The Jump On Army Cutworms In Alfalfa And Wheat 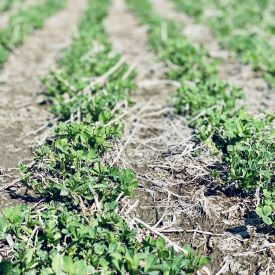 Now is an important time to be scouting your wheat and alfalfa fields for pests. Reports of army cutworms have come from across Kansas and Nebraska.  The Institute of Agriculture and Natural Resources at the University of Nebraska states “of the many cutworm species in Nebraska, the army cutworm is the most damaging in western Nebraska,” affecting both alfalfa and wheat.

In Nebraska, army cutworm larvae are becoming active after overwintering in the soil. The moths lay eggs in the fall and they hatch over time. The caterpillars are often seen first in the spring and often feed in the dark at night. During the day they take shelter and when the weather turns cold. As temperatures warm up, around 45F, army cutworms will begin to emerge, feed, and increase in size.

To scout for army cutworm, turn over clots of loose soil for cutworm counts. Sampling should be completed before an insecticide treatment. Treatment threshold is four or more cutworm larvae per square foot of winter wheat or alfalfa. For stressed, thin stands of wheat or newly established alfalfa stands, use a threshold of two or more larvae per square foot. New or stressed stands of alfalfa require lower threshold because they are more prone to damage.

May 04,2020
Year over year most farmers have a good idea of how much nitrogen they plan to apply to their crops, but many probably haven't given much thought to micronutrient fertilizers. The fact is, insufficient micronutrients can be just as detrimental to crop development as a macronutrient deficiency.
Dec 17,2019
How can you be sure that your fields are getting the most from soil-applied nutrients? Nutrients act differently in the soil based on their net charge, and some nutrients are easily tied-up in the soil. This means that you may be applying fertilizer that can’t be taken up by plants, because it is held too tightly by the soil.
Oct 28,2019
Winter annuals emerge in the fall and, if left uncontrolled, overwinter and begin rapid growth in the early spring. In Nebraska, Marestail is the toughest to control winter annual. More than 2 million acres in the state are infested with herbicide resistant Marestail. The majority of Marestail in Nebraska emerges in the fall.