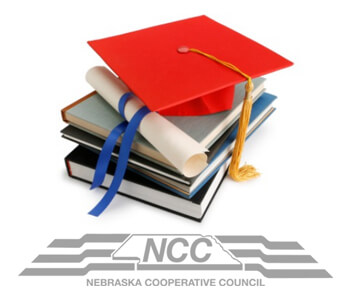 [LINCOLN, NE June 18, 2021] – The Nebraska Cooperative Council Education Foundation (NCCEF) has awarded 11 scholarships totaling $31,000 for the 2021/22 academic year to students at the University of Nebraska-Lincoln (UNL) College of Agricultural Sciences & Natural Resources, the Nebraska College of Technical Agriculture (NCTA) at Curtis, and the University of Nebraska-Kearney (UNK).

The NCCEF scholarship program was initiated for the 1993/94 academic year with funding from voluntary contributions from the agricultural cooperatives which are members of the Nebraska Cooperative Council. Since the program’s inception, 220 scholarships totaling $282,600 have been awarded.

To be eligible for the scholarships, students must be majoring in agricultural business/economics at UNL, agribusiness or ag production systems at NCTA, or agribusiness at UNK. Eligibility is restricted to sons or daughters of a parent or legal guardian who has been an active member, director, or employee for at least the prior three years of a cooperative which has been a member in good standing of the Council for at least five years. Our 21/22AY recipients are:

The purposes of the Nebraska Cooperative Council Education Foundation are to promote and encourage high  school graduates to pursue higher education in the agricultural and agribusiness fields through scholarships and the implementation of school-to-work programs with participating Nebraska cooperatives; to encourage high school graduates to remain in Nebraska in agricultural pursuits all of which will result in community betterment; and the preservation of agriculture as a way of life.